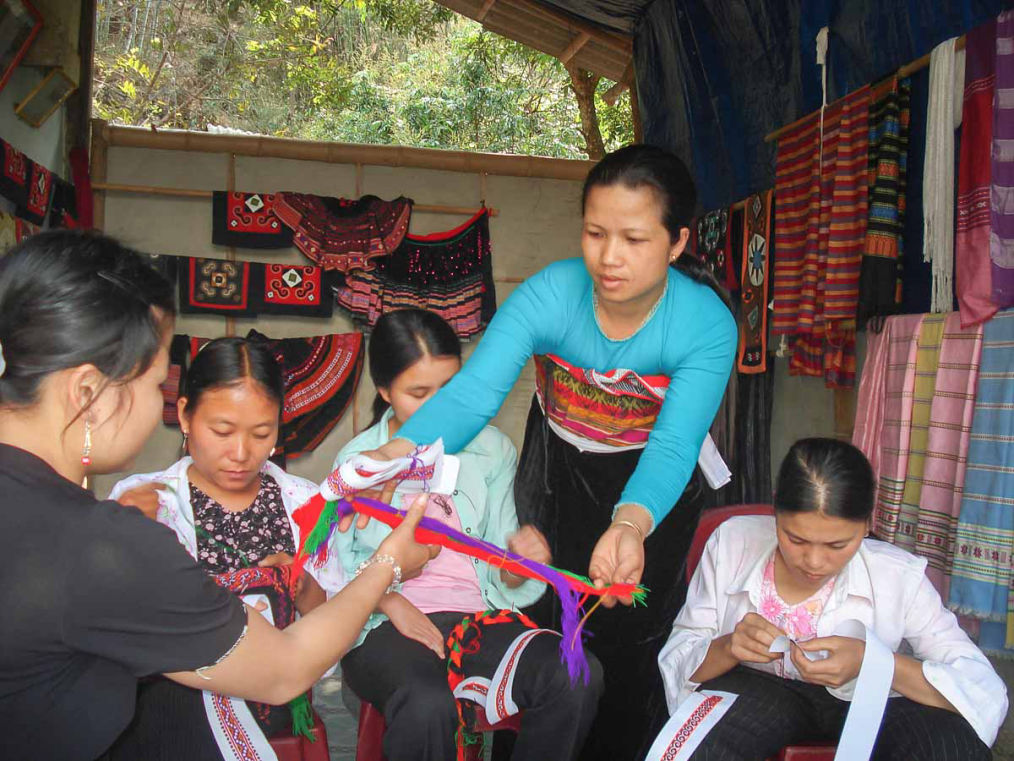 Mrs. Thuan had two goals when she started the business - to preserve her ethnic culture (the White Thai ethnic minority of Vietnam) and to support poor and disabled women in Mai Chau area. At her center Mrs. Thuan gave the women a place to live as well as vocational training to hold creative jobs in the art of crafting (textiles, garments, embroidery).

‘’Social protection center Thuận Hòa’’ was started with only 7 women. The original workplace was a simple tent. With some of the women living in villages several dozen kilometers away, Mrs Thuan hosted them in her family in order to facilitate their work. For these women the center was a new start in their life, giving them hope and confidence.

In 2015 a more spacious and modern factory was built with the earnings from sales and loans. The factory got the name Hoa Ban+. The number of women employed has also increased from 7 to 45 with 25 full-time workers and 20 part-time. Today the life of the women working in the factory is much more comfortable. Products are also increasing in diversity and popularity. 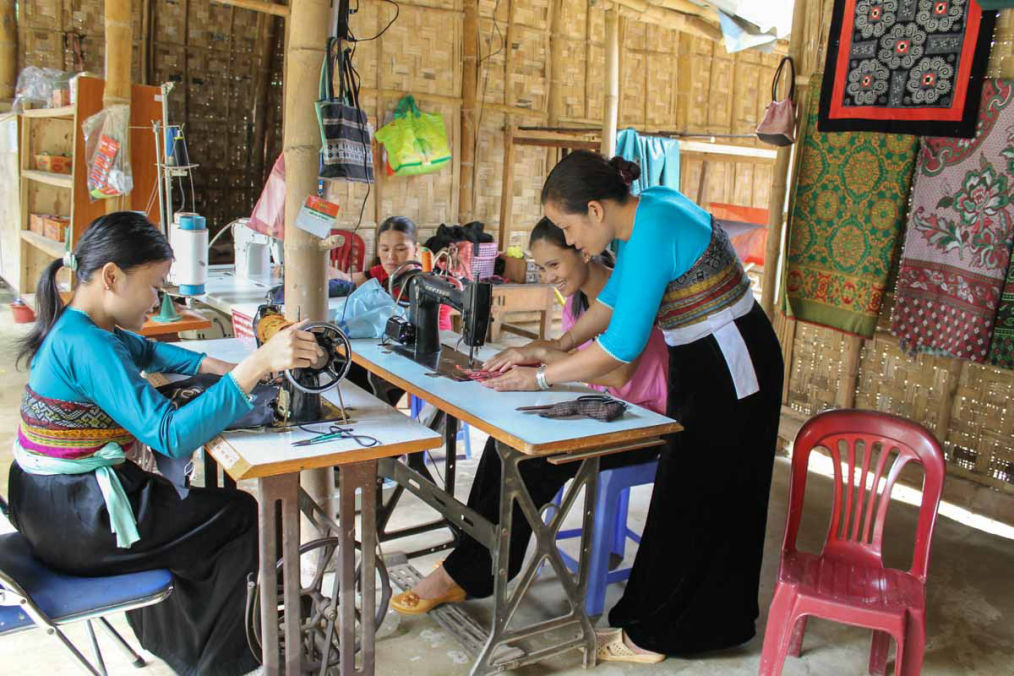 Hoa Ban+ factory products are a combination of weaving, sewing and embroidery, they are 100% natural and handmade, even the color of the yarn is made of natural colors from local plants. Many of the products are raw silk, which means they are made of silk extracted from silk worms grown in the area. Buying one of these products people do not only gain a high quality handmade item, but also get a little piece of culture and give these women a chance for a better life. 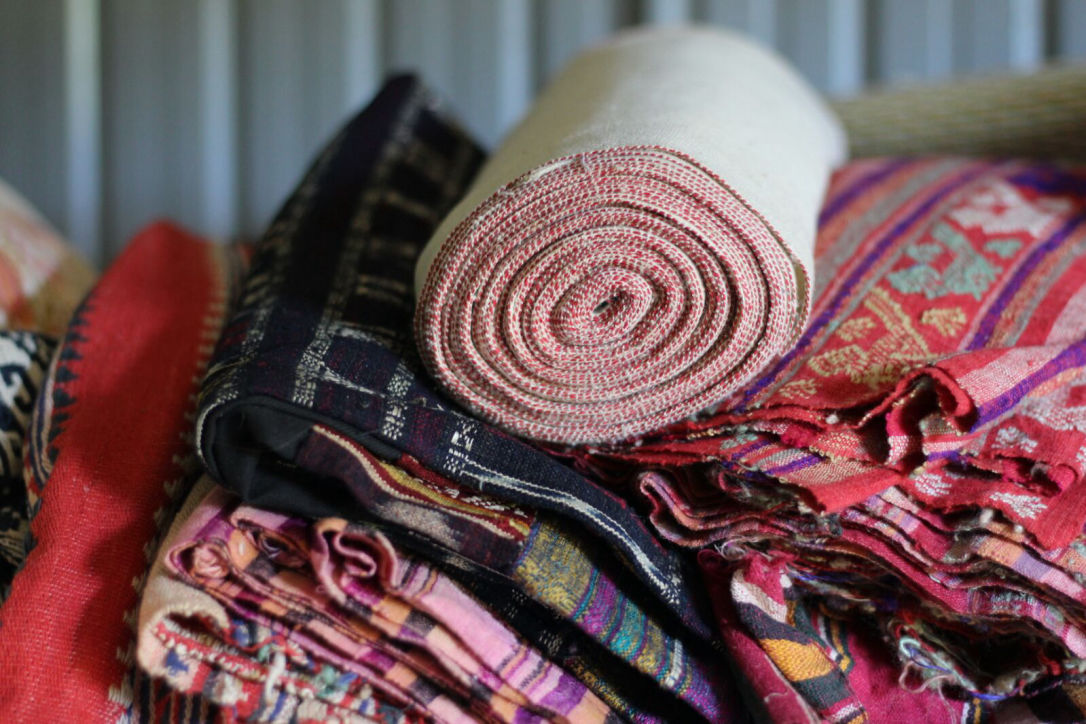 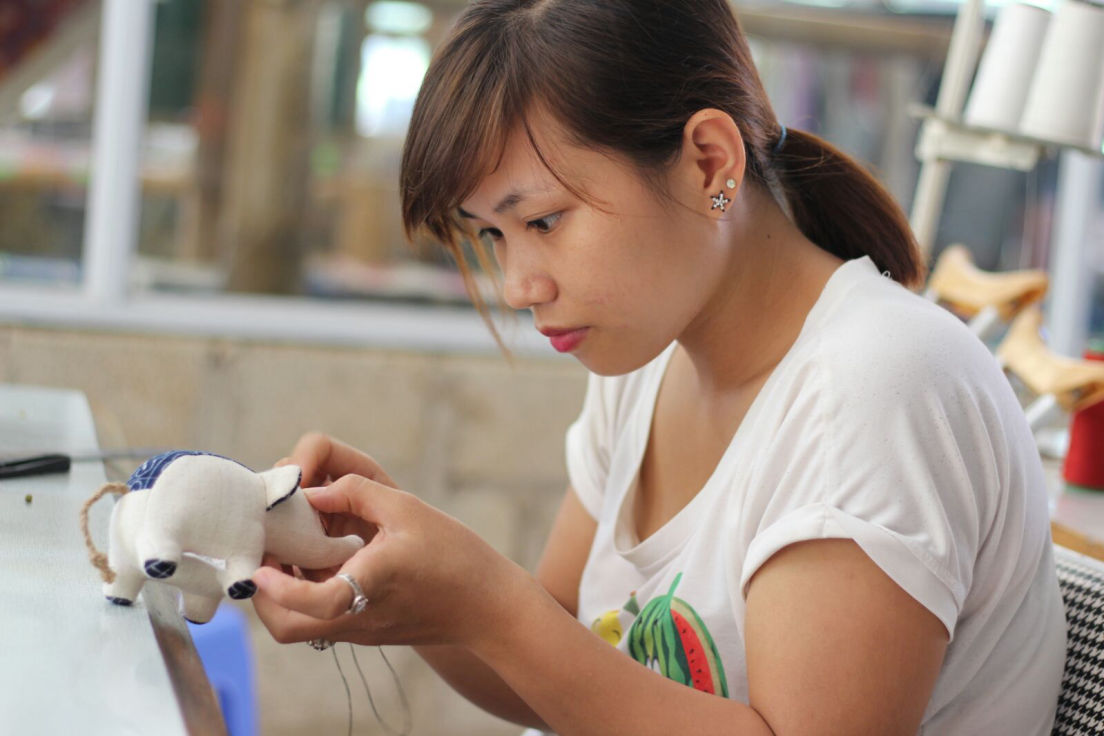 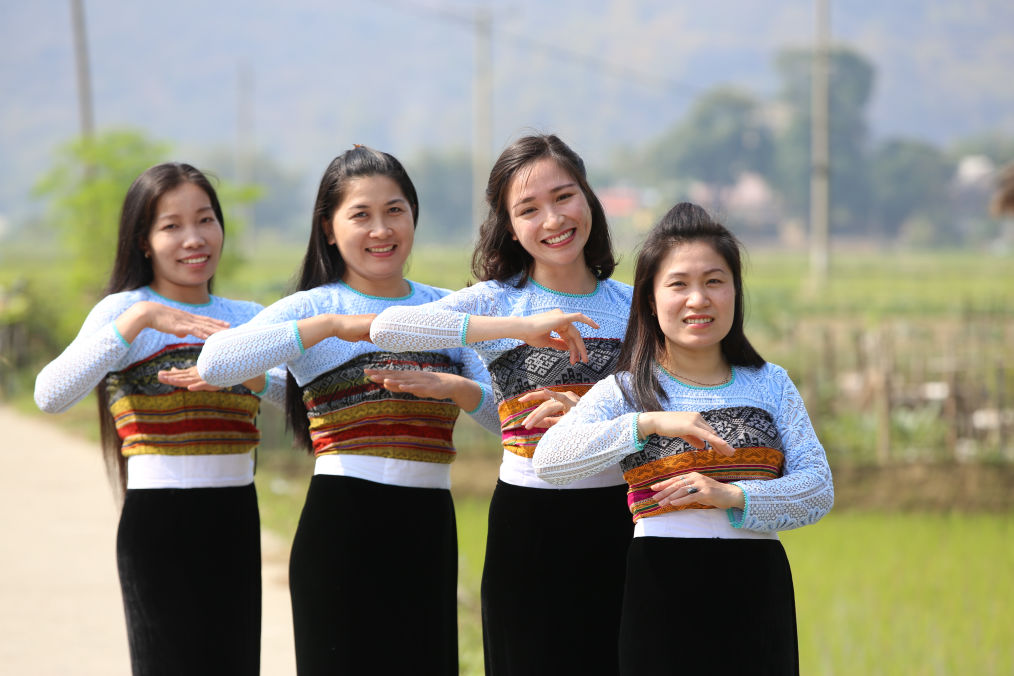 Since 2008, Hoa Ban + has established itself as a place to not only help disadvantaged women to make an income but is also a place where national identity of the White Thai people has been preserved. For understanding the real value of Hoa Ban + factory products, which are based on traditional handicrafts, here is the history of White Thai ethnic group. 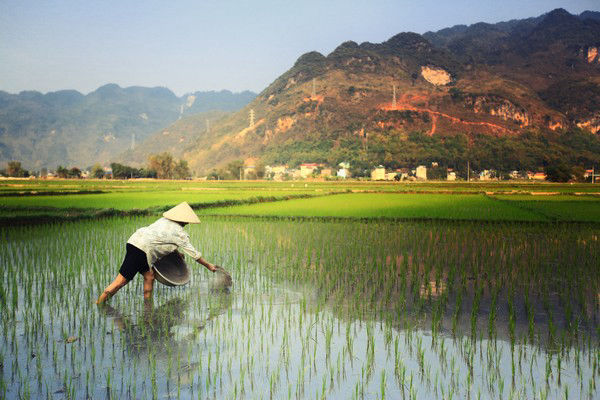 The White Thai people of northern Vietnam number between 250,000 - 400,000. They have been living in northern Vietnam for over 1,200 years, having migrated from Yunnan province in southern China to escape persecution. Descending from the Thai family tree, they are related to the Thai of Thailand and the Lao of Laos and closely related to the tribal Black Thai or Thai Dam.

The White Thai are closely related to another ethnic group in Vietnam the Black Thai. The Black Thai were traditionally nomadic people who frequently changed their farmland. The White Thai settled in permanent locations and engaged in wet rice cultivation with its higher productivity and greater stability. Living mainly on rice farming, the White Thai have a lot of experience in irrigating terraced rice fields, which has been passed down from one generation to another.

In addition to their historical differences, there are other different features of the two cultures. In the northwestern region, the White Thai usually wear bright-coloured costumes, such as white and pink. Their blouse has short sleeves and a heart-shaped collar. The Black Thai prefer dark colours such as black and brown. 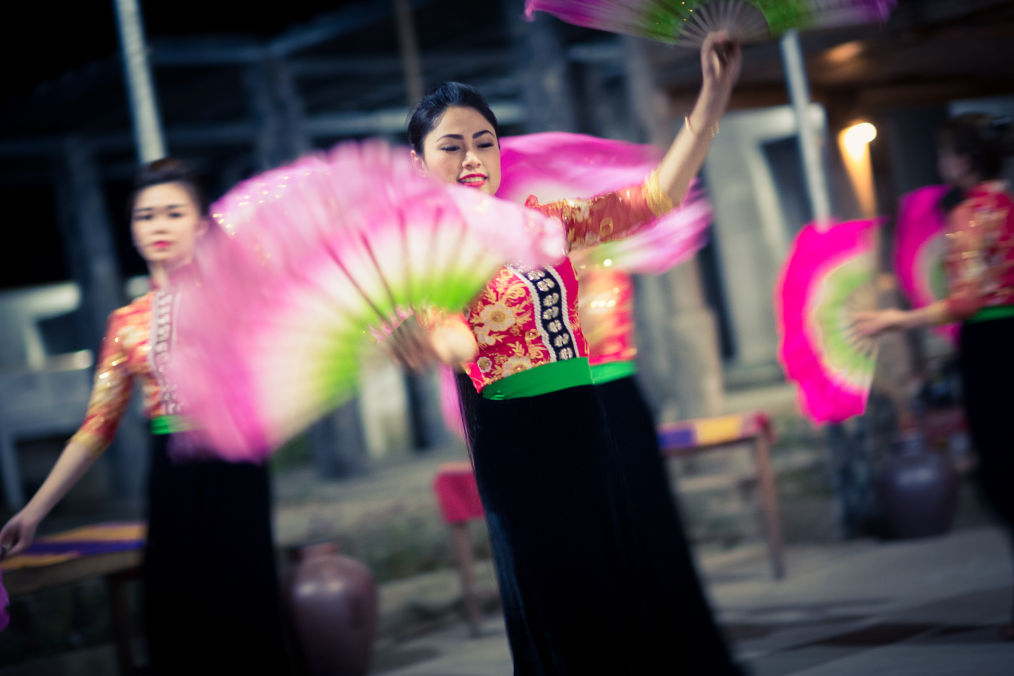 Animism or the worship of spirits dominates their world view, mixed with ancestor worship derived from their proximity to the Chinese and Vietnamese. The White Tai are known to be a very polite, hospitable people who are taught from an early age to respect higher rank and age. They are generally rice farmers, but hold positions as craftsmen, merchants and city government officials.

Families are the core of White Thai society. The entire immediate family often lives together. Although the father is considered the head of the family, White Thai husbands and wives have peaceful relationships. In fact, the White Thai are distinguished by an almost equal division of labor by sex. The women are well known, even on the international market, for their intricate, colorful and picturesque weaving and unique dance repertoire. 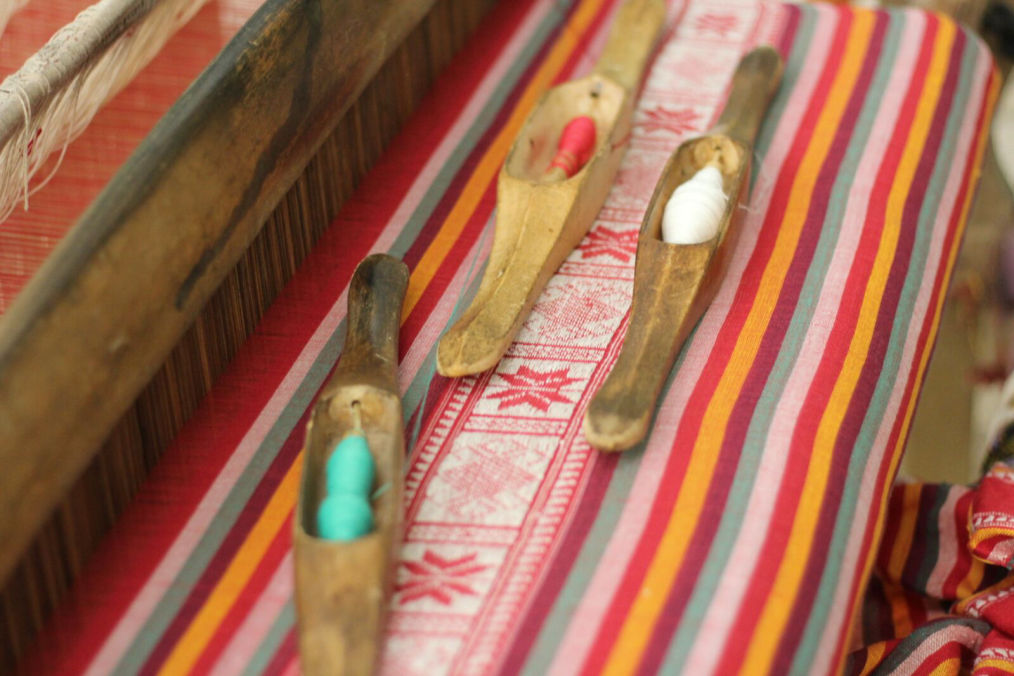 Weaving is the action of producing fabric by interlacing warp and weft yarns at right angles to each other. In the weaving process the warp and weft are interlaced by passing the warp through the whole length of parallel wefts. Every fabric is produced by using this weaving method of interlacing the threads called the warps and wefts.

In the White Thai tradition, every young Thai girl would learn to raise silk worms, make natural dyes, embroider and weave, but these skills are not as common as they once were. Traditional weaving was declining until tourism in the area created renewed interest and now there are over 300 looms spread over four villages in the Mai Chau Valley. Each is of traditional design and totally operated by hand.


The White Thai traditional weaving is a time consuming and intense process. Natural dyes and fiber were seasonal and involved many hours of labor. The weaving of a blanket would take at least a month to do one meter. Today, even with a modern loom, an intricate pattern can take over a week to produce 1.5 meters.
The loom is a complicated machine, each having the following key components: Warp Beam, Whip Beam, Heddle, Shaft, Reed, Batten, Treadles, and Peddles.
If you would like to see the actual weaving process on a working loom, you may visit the factory and one of the ladies will be glad to show you the process.